XRP Just Jumped 40% While Pushing Back In The Courtroom 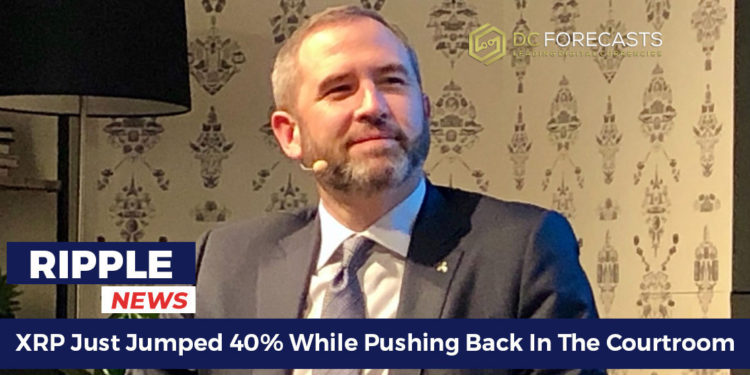 XRP jumped 40% while pushing back in the courtroom today while Dogecoin and Bitcoin are trying to recover after the “Elon Musk” effect. But, let’s focus on Ripple today in our XRP news.

The US Securities and Exchange got into legal proceedings against Ripple alleging that the company sold XRP as an unregistered security. Amidst the legal concerns, multiple crypto exchanges delisted XRP but to make the matters worse, the market capitalization dropped by 63% or $16  million which was disastrous for many investors. The first signs of home came once XRP’s price rebounded by 30% one week in the new year. Over the past 24 hours, XRP reached new highs of $0.51 before dropping to a low of $0.39 in about 40 minutes. XRP jumped 40% today while still continuing the week’s growth of 50% as it entered the courtroom.

Larry Cermak who is the director of research at the Block is still skeptical.  He thinks that XRP will be having something a moment similar to GameStop. He said that XRP could even be a victim of a pump n’ dump scheme. But whatever the situation might be, the surge came right when Ripple made a filing to rebut the SEC allegations. Ripple noted that the SEC overlooked XRP’s value as a utility:

“The functionality and liquidity of XRP are wholly incompatible with securities regulation. To require XRP’s registration as a security is to impair its main utility.”

XRP is being pumped by basically a pump and dump Telegram group and is up more than 50% in the last 45 minutes.

In the lengthy filing, Ripple pointed out that XRP is an open-source project and that its price has tracked Bitcoin’s and Ethereum’s. In the meantime, Ripple filed a freedom of information request from the SEC and asked how they determined that BTC and ETH are not securities:

“The SEC is bringing this action 8 years after XRP was created. How are companies meant to have regulatory clarity when the SEC takes 8 years to bring an action? Also, Ripple rightly points out that by ignoring Ethereum, which clearly had an unlawful securities offering, the SEC is arbitrarily picking the winners and losers. It’s clearly unfair and I do think Congress needs to step in here.”

Dean Steinbeck who is the general counsel and COO at Horizen Lab continued:

“If we’ve learned anything from previous SEC enforcement actions, the big players like Ripple will get off with a slap on the wrist relative to the size of their $1.3 billion unregistered offering.”