The Cardano September roadmap has recently been unveiled in the cryptocurrency news by the project’s founder, Charles Hoskinson. In the coming month, we are about to see further performance improvements, new wallet functions and a more active marketing for the altcoin.

As the Cardano news also show, the release of the Goguen update will make ADA “extremely competitive” in the DeFi space, with the first use cases such as stablecoins, oracles and decentralized exchanges being already in the pipeline.

A new video by Charles Hoskinson presented the goals that are now laid out in the Cardano September roadmap. As the IOHK CEO pointed out, the team will continue to focus on improving the performance of the Cardano infrastructure. Thus, IOHK will keep its work of the last weeks.

Wow, Daedalus 2.2.0 synced in under 10 sec 😮That is some awesome improvement. Thank you team. pic.twitter.com/YDL6Jdsu5c

With the release of the node version 1.19 and the Daedalus version 2.2 ten hours ago, progress has been made in this area. As Hoskinson noted and the community confirmed, a lot of improvements are coming for ADA.

The Cardano September roadmap will also focus on the Daedalus wallet, and the new features including Multisig, the hardware wallet center, some delegation portfolios and the “one-to-many” delegation which will have the highest priority. Furthermore, the IOHK CEO also plans to integrate Yubikeys which is a QR code center and shielded paper wallets.

When it comes to Goguen, Hoskinson said that the development is in full swing. A detailed roadmap will be presented at the end of September along with a rollout date. For those of you who don’t know, Goguen is the third development phase of Cardano, which will add three important components to the ecosystem. 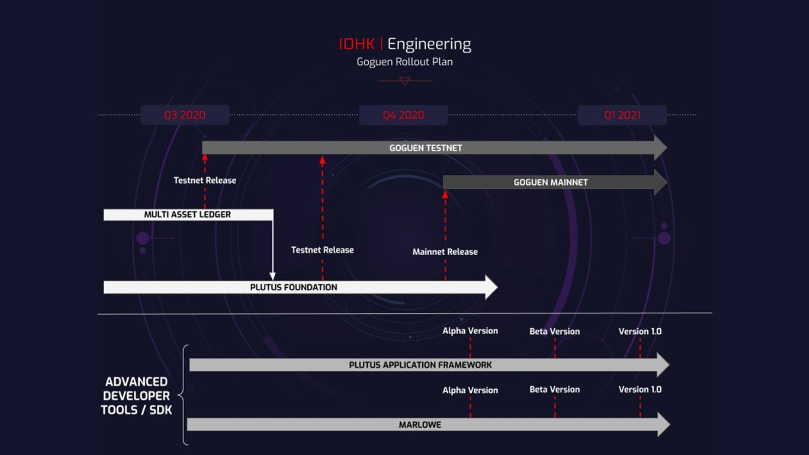 Goguen is also an important milestone because it will lay the foundation for Plutus, the smart contract platform, and also introduce the extended UTXO model. This means that from this point on, the smart contracts can be developed and executed within the Cardano blockchain.

“And this means that smart contracts can now be executed that go beyond simple things and are actually fully programmable. But this is something like the low-level stuff. So you can write smart contracts, but many of the included libraries are not included in this foundation, mainly because it is a whole ecosystem play. And this ecosystem play is called Plutus Application Framework.”

According to Hoskinson, the rollout of these three components will make the Cardano cryptocurrency extremely competitive, especially in the DeFi sector.