The Bitcoin news now show that BTC, as the most dominant and popular cryptocurrency out there, is again above the psychological mark at $9,000. As the Bitcoin price crosses the $9,000 mark, the analyst named Peter Schiff warns of a potential collapse. However, the BTC price is doing well today.

In a swoon scenario like this, BTC can fall in the $8,000 and even $6,000 levels according to many. The mission to create new support levels continues. Today, we can see that the traction behind Bitcoin is solid and the price managed to secure the $9,050 level this morning.

As data online shows, BTC has been grinding upwards on Tuesday, having hit lows near $8,800. The past week also saw multiple crossings of the $9,000 boundary, with the markets still being undecided about the strength of this area. We can even see that in the chart presented below. 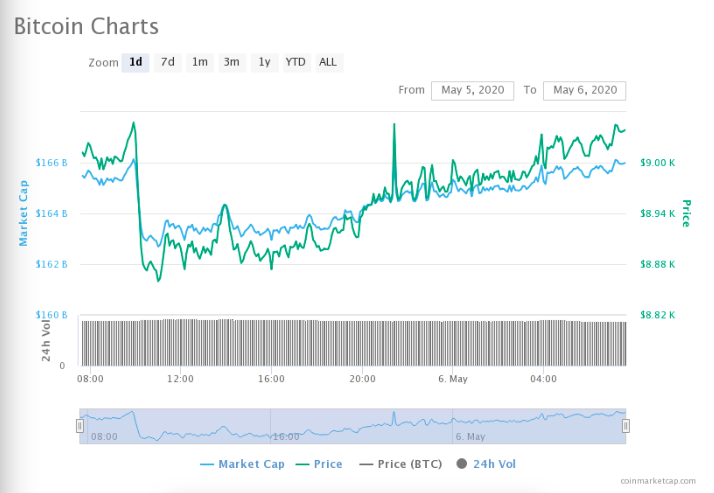 Previously, we saw Bitcoin beating multiple resistance levels to rise from the mid $7,000 range range which had long kept it in check. As Peter Schiff said lately, Bitcoin would soon collapse, aiming at the theory that the upcoming block subsidy halving would fuel a BTC price rise. He said:

“A consensus trade is crowded and usually doesn’t pan out as the crowd expects. I can’t think of a more consensus trade in #Bitcoin than being long going into the halving, an event that is universally believed to be extremely bullish.”

A consensus trade is crowded and usually doesn't pan out as the crowd expects. I can't think of a more consensus trade in #Bitcoin than being long going into the halving, an event that is universally believed to be extremely bullish. So once the halving occurs, who's left to buy?

However, not every analyst has an opinion like Schiff. Michael van de Poppe, for instance, recently said that since the crash to $3,750, the strength of BTC as an asset has improved. He noted that even in the area around $9,000, the Bitcoin price crosses many points and is doing pretty well.

The analyst even said that a reversal to as low as $6,000 would still qualify as “doing pretty well” for Bitcoin, which has beaten all macro assets in terms of year-to-date performance.

Bitcoin is leading the green wave today with its new increase. The altcoin news and rumors show a mix of greens and reds but mostly minimal profits and losses in the top 10 as we speak.

We will update you again on the crypto market prices as the day proceeds!